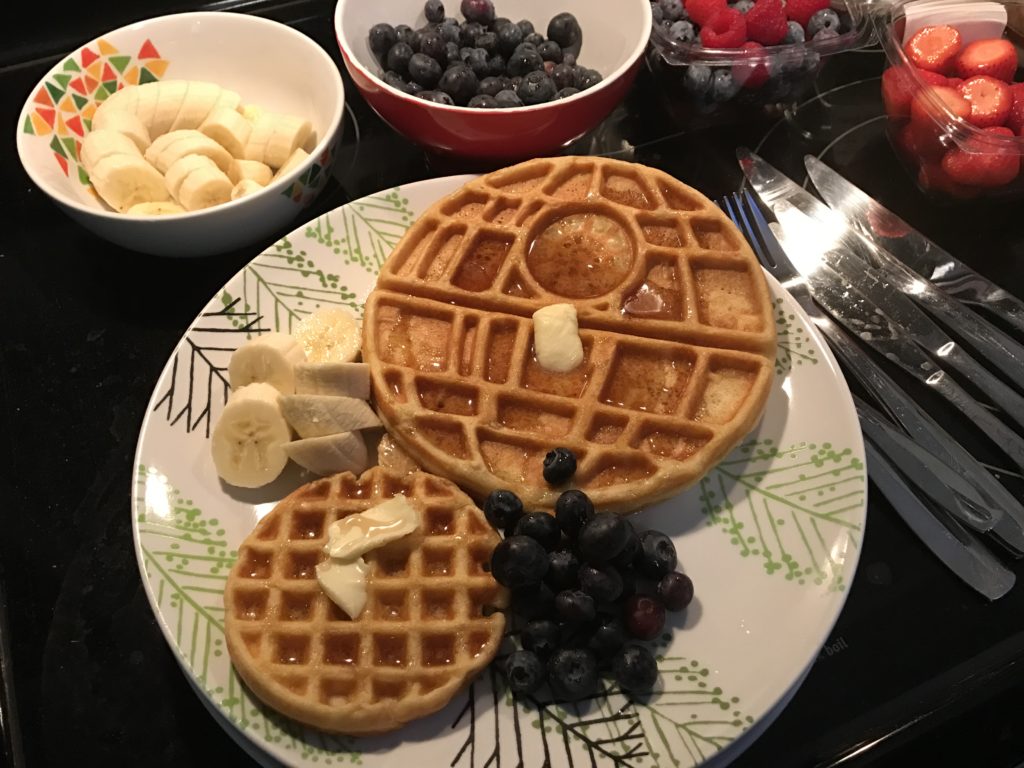 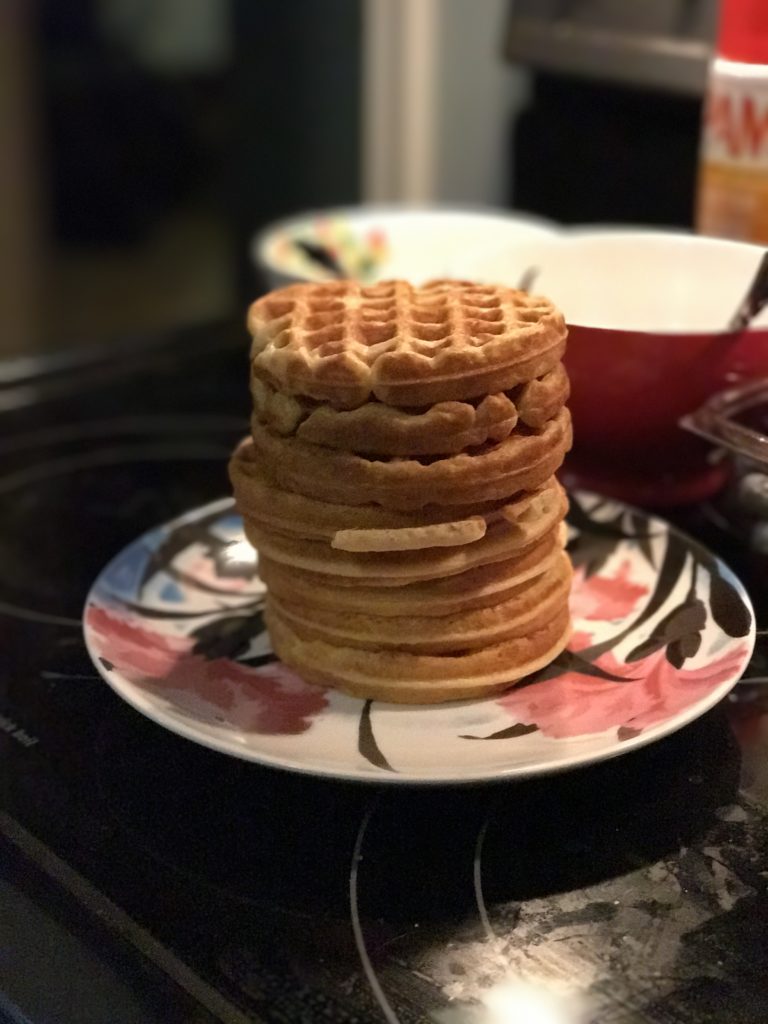 June of 2016 marks an important time in ISCoW (International Supreme Council of Waffles) history: the Calgary Waffle Club was formed. Expansion of waffle enthusiasm is a much celebrated event! Time and again, Dougie meets with the Calgary delegates, usually at Buttermilk Fine Waffles, but in December of 2016 a Calgary Waffle Club Delegate ventured up north and a meeting was held.

The Director and Dougie met at one of the University of Alberta’s popular watering hole/eateries: The Sugarbowl. Always a cozy experience (read: small restaurant with constant clientele) the duo of wafflers shared a table with a pair of strangers and their meals were ordered: The Chicken and Waffles.

The Director would like the preface the following review with: what came first? The Chicken or the waffle? Obviously the living breathing chickens of the universe came first but I this question intrigues culinary minds to track the history of fried chicken, of waffles, and of their eventual partnership in the now seemingly trendy dish of Chicken and Waffles. If you must know you should read about Southern United States cooking.

The waffle was soft, perhaps too soft, on it’s own. The chicken was: engaging. The watermelon salsa that it was served with was insane on the taste buds really levelling up the chicken, with the waffle, with the salsa. Commendations for the combo.

Overall, the waffle was mediocre but excellent chicken and surprising salsa topping made this dish soar.

Ratings rang out ditto and likewise:

Fun Time Douglas, Critical Bill, and Magnum PI set out on a cool November night for dinner and ended up at the hip downtown joint: The Common. Chicken and waffles was on the menu and Bill revealed that he’s never had the classic, and suddenly trendy, combination of fried chicken and waffles. So, here we go…

This post is going be done in Critical Bill’s own style: brief, no bullshit, and full of expletives.

Critical Bill: Waffle ok. Best when hot, the quality disintegrated with time. Whatever the fuck that berry shit was it was good. Chicken ok. Juicy. Butter was top flight. Combo of all the components was pretty tasty. Maybe not sold on the concept and my cocktail went all wrong! Company kept was superb. Wouldn’t have my waffles any other way than with good fucking company.

Fun Time Douglas: it was too dark to take a picture of the waffles. Just imagine a round waffle cut into it’s quadrants, stacked on their side, served with two pieces of fried chicken, a pad of butter placed on top, and that “berry shit*” on the side (*a blackberry compote, I think, and it was in fact quite good).

Fun Time Douglas agrees that the combination of flavours was pretty tasty with the juicy chicken raising the profile of this waffle.

Our guest, Magnum PI, commented: it was just a pleasure to behold the ISCoW founding members at work.

Dougie ventured out on her own for a second waffle adventure in Vancouver. She felt like a bit of a dolt ordering the sweet Belgian Waffles at an establishment called Yolks, prided on their perfectly poached eggs. But, alas, Dougie takes her role as a Waffle-officer seriously, it’s part of her waffle-osophy. So, with the promise of perfect yolks foregone she ordered that sweet Belgian Waffle with definitive resolve.

Let’s get down to business. Dougie was entertained by the lively foot and road traffic on Broadway as she perched on the cozy barstool in the window. ‘Oh my goodness,” Dougie exclaimed when the waffle arrived at her window seat. The presentation and dusting of icing sugar made for a whimsical display almost too delightful to eat (in fact the real estate on the rectangle plate was difficult to navigate with the tower of waffles. Dougie deftly dissected the display). 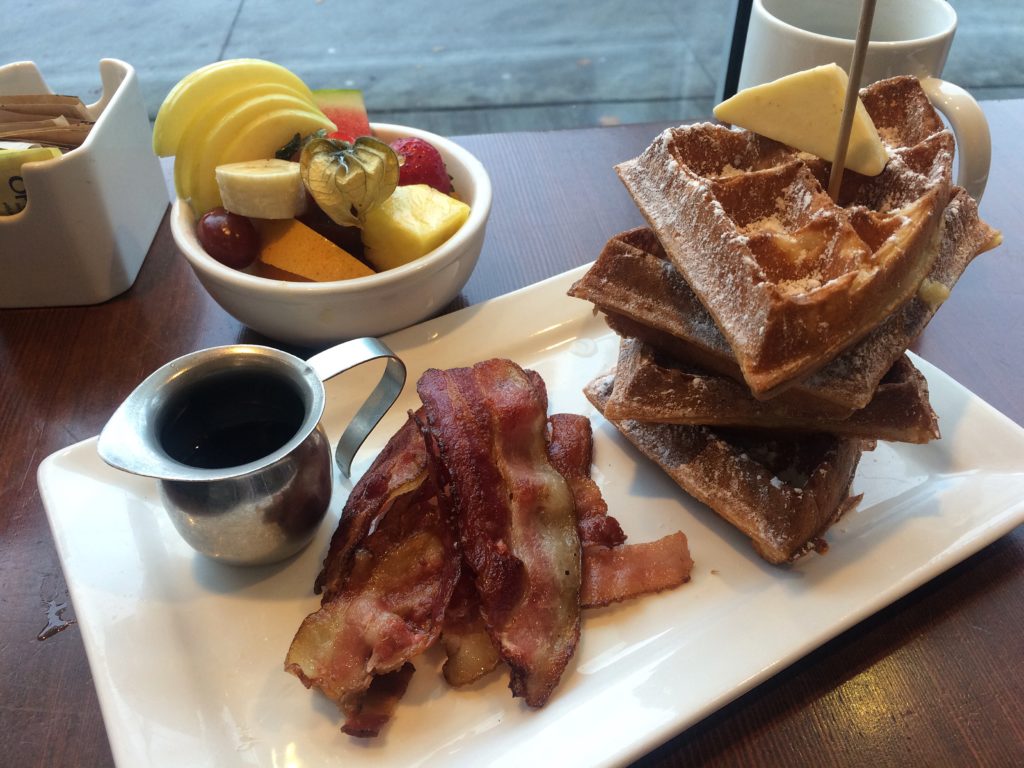 Overall flavour and crispy exterior were excellent but the interior was a little dry. The slice of triangular butter added to the layered display but wasn’t practical for spreading. There was a fantastic helping of bacon and the fruit bowl drizzled with honey, lemon, and mint was superb. The attention to fruit bowl elevation made a usually cheap breakfast addition really standout. Refreshing!

Dougie also thoroughly enjoyed the service, her server was charming, kind, and gave her very helpful directions to navigate the transit system.