Dougie ended up at a show in a location that can best be described as a room resembling a basement from the 1970s. It was there that she ran into guest Waffler DJ Guru Lou. 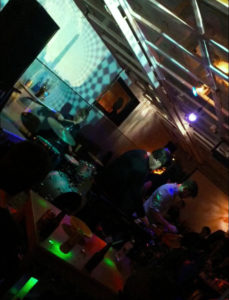 “The Waffle Log Blog has inspired me to up my waffle game at home. I’ve just been using batter from a box.” said Guru Lou late on Saturday night. “It’s all about the butter and syrup.” Guru Lou added.

“The waffle is the vehicle.” Dougie nodded, sagely.

“Exactly,” Guru Lou said confidently and astutely added, “And, like, a Sunfire is a vehicle and a Ferrari is a vehicle. One is obviously better.”

The council thanks DJ Guru Lou (also read as: Bong Sample) for his musical contribution (read: granting Dougie permission to hijack the tracks) to the Waffle Log Blog Video (read: the video too long to actually watch) on the home page.

A long loved and lasting establishment in Edmonton, Barb and Ernie’s Old Country Inn was the destination and waffles the prize. The hospitality was supreme and service delightful, however, with only one in-house waffle iron the council put some strain on the kitchen. Without too much delay the council was feasting on beautifully topped waffles and accompanying sides.

Pete the Patient Pirate: Satisfied. The toppings of strawberries and whipped cream were delectable and the waffle had prime syrup soaking abilities. It was soft and squishy, and not too heavy.

DJ Guru Lou: It’s too big but nice and round. Easy 4/5 sans honeydew on the plate. Honeydew is bullshit.

Critical Bill: Soft in the middle. Could’ve been crispier.

Fun Time Douglas: Too soft, needed that extra crisp on the outside for a better syrup barrier. A bit unevenly cooked. Overall excellent balance of sweet and savoury flavour. Note: the atmosphere of this establishment is like the comfort of a Grandparent’s home, cozy as heck.

Unanimous four cheers for the bacon, A+ all around in that department.

Coming soon: the origin story of Pete the Patient Pirate!