Fun Time Douglas, Critical Bill, and Magnum PI set out on a cool November night for dinner and ended up at the hip downtown joint: The Common. Chicken and waffles was on the menu and Bill revealed that he’s never had the classic, and suddenly trendy, combination of fried chicken and waffles. So, here we go…

This post is going be done in Critical Bill’s own style: brief, no bullshit, and full of expletives.

Critical Bill: Waffle ok. Best when hot, the quality disintegrated with time. Whatever the fuck that berry shit was it was good. Chicken ok. Juicy. Butter was top flight. Combo of all the components was pretty tasty. Maybe not sold on the concept and my cocktail went all wrong! Company kept was superb. Wouldn’t have my waffles any other way than with good fucking company.

Fun Time Douglas: it was too dark to take a picture of the waffles. Just imagine a round waffle cut into it’s quadrants, stacked on their side, served with two pieces of fried chicken, a pad of butter placed on top, and that “berry shit*” on the side (*a blackberry compote, I think, and it was in fact quite good).

Fun Time Douglas agrees that the combination of flavours was pretty tasty with the juicy chicken raising the profile of this waffle.

Our guest, Magnum PI, commented: it was just a pleasure to behold the ISCoW founding members at work. 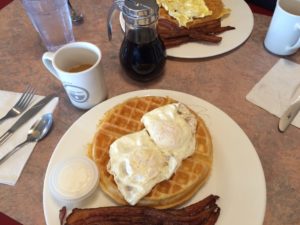 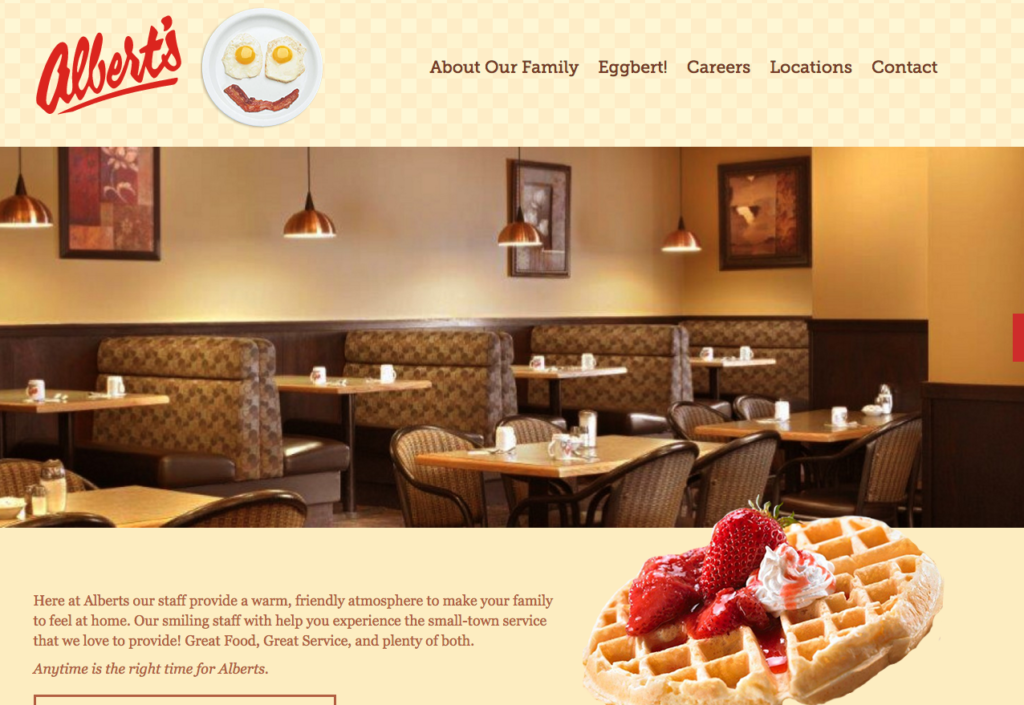 The unintentional inaugural Valentines Day meeting of the International Supreme Council of Waffles: “For The Love of Waffles” took place on February 14th 2015.

Before we begin, I must remind readers that the International Supreme Council of Waffles is in search of the best waffle. In order to achieve our goal we had to set high standards. So, if our critique on the waffle in question seems harsh it is because we are committed to our task. Also, the rules of the ISCoW are that each individual member makes their own criteria and/or waffle rubric. It allows for a diverse Council with a larger breadth of perspectives in the hopes of serving all waffle desires. So let’s get on with it, man…

A nice cozy atmosphere was appreciated on this snowy and cold Saturday but perhaps reggae and waffles were not meant to be. Dougie suspects that it was an off night for the waffles as she had previously experienced delightful waffles from this establishment. One plain waffle was ordered, served with butter and syrup as a waffle was meant to be, and one special: topped with powered sugar, fresh strawberries, and chocolate (note: Dougie quite dislikes chocolate but finds it tolerable in small quantities. In this case it was a rich dark chocolate and complimented the strawberries).

The official report is: the waffle itself was too soft and battery, this waffle is in need of a more golden colour, a crispier outside, and fluffier inside. The beverages on the other hand were delicious. An old school chocolate milk for Bill and real brewed iced tea for Dougie. Critical Bill has a deep-seated philosophy regarding the purveying of the waffle: “They are best served in places with the words ‘cafe’ or ‘diner’ in the title by an older lady named Bev or Flo in a uniform and she calls you ‘hon’, if she is smoking all the better. A place with ‘Cha’ in the name and being served by a hipster dufus named Chad who calls you Dude probably is not going to resonate.” But, then again, Bill longs for a simpler time.

It should be noted that the company was quite enjoyable and thus the inaugural meeting of the International Supreme Council of Waffles marked the beginning of the mission to find the best waffle. Closing remarks, Critical Bill says the waffle was, “Dressed up but no party”. Rating: Dougie and Bill: 2/5 Waffles.

Introduction To the International Supreme Council of Waffles (Geneva)

From its humble beginnings on Feb 14th, 2015 The ISCoW (Geneva) flourishes in bringing both the love of the noble waffle and critical discourse to reviewing and searching globally the best of waffle world. Situated in beautiful Geneva overlooking stunning Lac Leman under the majesty of the Alps and Jura Mountains the Council was established to fulfill the highest standards.

The first was to be not nearly as corrupt as FIFA or the International Olympic Committee but an institute built on semi-incorruptible standards and fair play.

The love of waffles drives the institute, the search for great waffles and bringing our results to you the waffle loving public, our mission. At the Institute we are cognizant that perfection is unattainable, but extraordinary is. Our Chief Executive Officer will delve into the many components of what makes the truly memorable waffle experience.

I wish you the best in your reading and in your personal waffle growth.